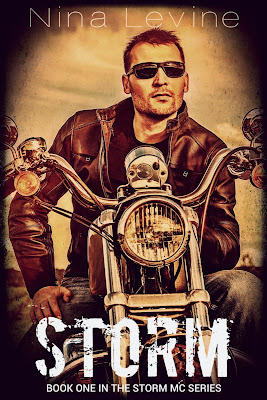 Life can be a bitch but love can get you through any storm.

Madison Cole’s family is the Storm Motorcycle Club. Her father is the President and her brother is the VP. She grew up surrounded by bikers, crime and violence. Two years ago she walked away from her family and the world they live in. Her soul was shattered, her heart was broken and she had an addiction she couldn't shake. She picked up the pieces and put herself back together. Now her family wants her back. The club is being threatened and they send a club member to return her home to safety; the one person that could destroy everything she has worked so hard to build.

Jason Reilly has sacrificed a lot for the motorcycle club he calls family. Two years ago he made the biggest sacrifice of all; he gave up the woman he loved for them. Now he is being sent to bring her back and he is conflicted. He thought he was over her but discovers their connection is as strong as ever. Their love was all-consuming, passionate and fiery. It was also their undoing and he doesn't know if either of them is strong enough to battle the demons that ripped them apart, to find love again.

Madison and Jason are brought back together by a force out of their control; one that pushes them to a breaking point. Can they overcome their past and discover a love worth fighting for or will the harsh reality of their world finally and completely break them both?

Fuck, she wasn't going to make this easy for either of us.  I was convinced that Scott was handing me my balls on a plate by sending me here.  One look at Madison and I wanted to shove them at her and get the fuck out of here.  Christ, she was still as goddamn sexy as the last time I laid eyes on her.  I ran my eyes down her body and took in the low-cut, short dress and fuck me heels; god I loved those shoes and my dick twitched just thinking about wrapping those legs around me.

“Can we talk outside for a minute?” I asked.

She pursed her lips and appeared to be assessing the situation before she gave me a curt nod and said, “Fine.”  And with that she grabbed her purse, brushed past me and stalked towards the front door.  I watched her ass sway as I followed her out and told my dick to settle the fuck down.  No way were we going there again; I was here for one reason and one reason only.

Once we were outside she reached into her purse and pulled out a cigarette.  She quickly lit it and took a long drag.  God, I hoped she was still sober; last I had heard she was and she looked pretty healthy but the way she sucked on that cigarette looked like a junkie fixing for their next hit.

“Scott told you I was coming, yeah?” I asked, taking in the glare she had levelled on me.  Yep, balls on a plate.

“No,” she snapped, “He said someone was coming but he failed to mention it was you.”  She looked like she was going to say something else but took another long drag on her cigarette instead.

“Well, you've got me until he pulls me back home so I say we make the best of a shitty situation and put our crap aside.”

She took another long drag on her cigarette, threw it down and ground it out before scowling at me, “You’re a fucking asshole, J and for all I care you can go to hell.”

Nina Levine is an Aussie writer who writes stories about hot, alpha men and the tough, independent women they love. You won't find any whiny, spineless women in Nina's books and you certainly won't find any weak men.

A warning though, you will find hot, dirty sex, lots of swearing, occasional violent encounters and men and women who live fast and love hard.

Nina's debut book Storm will be releasing in November 2013. It is based around the Storm Motorcycle Club and is the first book in an MC series.

Nina is giving away 3 eARC's of Storm.
These will be sent out the week prior to publication in November.