Release Blitz - The Guy In The Middle by Kate Stewart 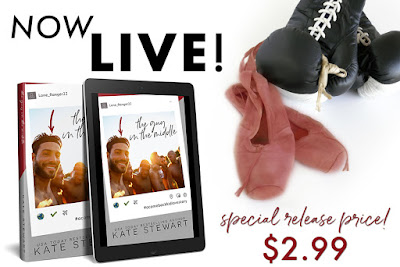 The Guy in the Middle by Kate Stewart is LIVE! Check out this jaw-dropping excerpt! Don't forget to one-click yours today! 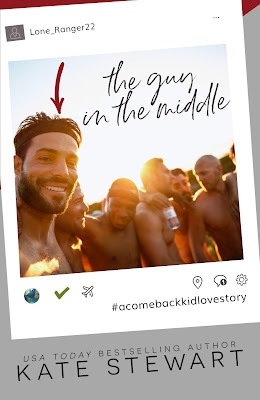 Blurb:
I was born to play and bred to win.

My priorities were instilled in me early on—family and football. Those ideals led me to TGU and a coach whose ironclad principles mirrored my own.

With one last college season to play, my goal was singular—get drafted. By realizing my NFL dream, I could save my family, our ranch, and the only home I’d ever known.

Playing hard was my only option, but there’s always a wild card.

For all of my planning and hard work, I never anticipated falling for the coach's daughter. Harper was a fair catch, but who knew loving her could be the one play to throw my career before it started or that the weight of our secret would change the game.

*This is book #3 of The Underdogs Series, but you can read as a stand-alone. *Formerly published in Team Player 2 but is now a 107k full length novel with an extended epilogue.

Lance Prescott and Harper Elliott. They are each other’s opposites and they but heads immediately leaving no doubts of their tantalizing chemistry. Harper is not a woman to hold back when she’s got something to say. She’s a fighter. Lance is the introvert that keeps to himself and takes on so much more than is necessary for a guy his age. He’s all about his family.
TGITM is the book that has a little of everything. Enemies to lovers, some great laughs and to top it all of second chance that will blow your mind. It’s jammed with emotions. Gut wrenching, heartbreaking emotions which left a huge impression on me because I’ve come to care so much about these characters.

The story arc Lance and Harper embark upon is not easy peasy. It’s a tough and emotionally dark story because of the struggles they’re facing are real and relatable. What they go through makes them stronger. They grow and evolve. Together and separately but it takes time. That time spent is filled with them discovering a lot about each other and themselves. This isn’t just on the surface issues. No these are emotional scars which Lance and Harper deals with and they’re explored flawlessly.

The secondary characters especially Lance’s family plays an integral part of his and Harper’s journey. Harper’s amazing and hilarious friend Rene is the loyal support she needs. The other Underdogs and their women make appearances too.

TGITM is different from the previous two books and I’m glad. It’s more angsty and has depth. It’s necessary given the topics this story deals with. Kate Stewart goes for the jugular, not holding anything back but goes all in. That’s why the story and its characters resonated with me and hit me so hard.
The Guy In The Middle is the perfect addition to the series and the epilogue couldn’t be better. The Underdog series is ending on a high note.

“I’ve missed you, you know? More than you can imagine.”

“Can’t imagine it at all,” he says, picking through a book he’s not reading.

“Can I help you two?” One of the store sales associates asks, and I shake my head and smile. When she takes her leave, I look over to Lance who stands fuming on the other side of a table filled with loose items. We’re in a mismatch shop full of mostly cheap junk, and I can’t imagine him finding anything for his mother here.

“Lance, I have missed you. Horribly.”

“Could have fooled me.”

I can only take so much. Irritated, I lift a designer coffee mug from the table.

“Nope.” He’s not even looking at what’s in my hands.

“You sure? It’s a hide purse. Cute for a rancher’s wife, don’t you think?” This gets his attention, and stormy eyes lift to mine.

“Would you buy that for you?”

I look it over and shake my head. “Not really my style.”

He looks up completely unaffected, “Nope.”

“I don’t think we’re in the right place,” Tossing the box down, I stalk out of the cluttered shop and into the department store next to it. He’s hot on my heels.

“Got that fucking right.”

I turn back to see he’s spoiling for a fight and release a stressed breath. Fighting with him is the last thing I want to do. “Look, lets, just…” I search around and pull a sweater from the closest rack. “How about this? Simple, elegant.”

“You think Mom’s simple, huh? I’ll give her your regards.”

“That’s it.” I hook the sweater back on to the rack and close the space between us, forcing his eyes to mine. “God, you’re still a brute, aren’t you? You haven’t changed a bit. Still pig-headed as hell.”

“Pig-headed?” He opens his mouth in mock shock and covers his chest with his hand. “How dare you.”

I’m in between fight or flight, but I’ve been dodging this long enough. My heart can’t take more confrontation. I missed him too much. His eyes flare with satisfaction at my irritation. “Misery loves company, right, Lance?”

“Never said I was miserable.”

“You don’t have to. Did you come to New York just to torture me?”

A voice sounds from next to us. “Is there something I can help you find today?”

We both turn to the woman with lasers in our eyes, and she swallows. I clear my throat. “We’re fine. Thank you.”

Lance winks at the woman, his eyes scanning her form. “Maybe you can help me?”

“You son of a bitch,” I hiss, before walking away from the table. His voice rings out next to me as I rip through a rack of scarves.

I reel on him. “Don’t you dare! Leaving you was the hardest thing I’ve ever done in my life. I had to make a clean break. I had just lost everyone that mattered to me. I was losing my mind.”

“I got pissed for one day, and you went off the grid.”

“And you let me go because you knew no matter how much we wanted it to work, it couldn’t. You have no idea what I went through!”

“What you went through? Do you know I spent six months ranting to an Uber driver named Dave because everyone on my team hated me when the truth came out?” He stomps after me as I pull sweater after sweater off the rack. “Troy jumped ship after he got drafted. I had no one but Tony and those fights.”

I turn to him with twenty sweaters in my arms. “Jenner? When did y’all get so tight?”

“When shit got tough, and my fucking girlfriend bailed!” He glares down at me, his breaths coming out fast.

“Guys, we’re going to need you to take this outside.” A woman whom I assume is the store manager approaches us cautiously.

I look around the store and see all eyes are on us, especially the women sizing him up. “He’s available ladies,” I snap, laying the sweaters on a nearby table, “I’m willing to bet he comes really cheap.” He’s on my heels as I push through the glass of the department store.

“Oh, was I supposed to wait for you? Must have missed that memo. That’s it, you must want a saint. That’s why you didn’t stay.”

“I was twenty years old and alienated from a place I didn’t want to be anyway.”

“That’s not the way I meant it. And you know damn well until you, I was only there to appease my Dad, who I barely speak to now.”

“I’m sorry about that, I am, but that’s on him. And what in the hell are you talking about ‘alienated’?”

“Forget it.” I pull on my gloves as heavy snow starts to come down. “I think we’ve concluded our tour for today.”

He glances around the sidewalk. “Well, no need to show me more, I hate this fucking place!”

“And why is that? Not enough free-range chickens?!”

His eyes flare. “You digging on the ranch now, Priss? I saw a fucking rat the size of a cat on my run this morning!”

“Probably has better manners than you, shit head.”

“Pulling out the big guns now, huh? There’s that backbone. I was wondering where it went.”

“Go home, Lance, you hate it here. And you obviously hate me.”

“Just the opposite. It’s impossible, and believe me, I’m trying!”

“Well, I hope you succeed! Thanks for stopping by, Mary Poppins. Best Christmas ever! Make sure to bulldoze the nativity scene on your way out!”

“Fuck this.” He throws his hands up and eyes me warily before turning and walking away.

“Merry Christmas to you, too!”

Kate is a lover of all things '80s and '90s, especially John Hughes films and rap. She dabbles a little in photography, can knit a simple stitch scarf for necessity, and on occasion, does very well at whiskey.