Death of a Rock Star by NJ Frost is NOW AVAILABLE!!! 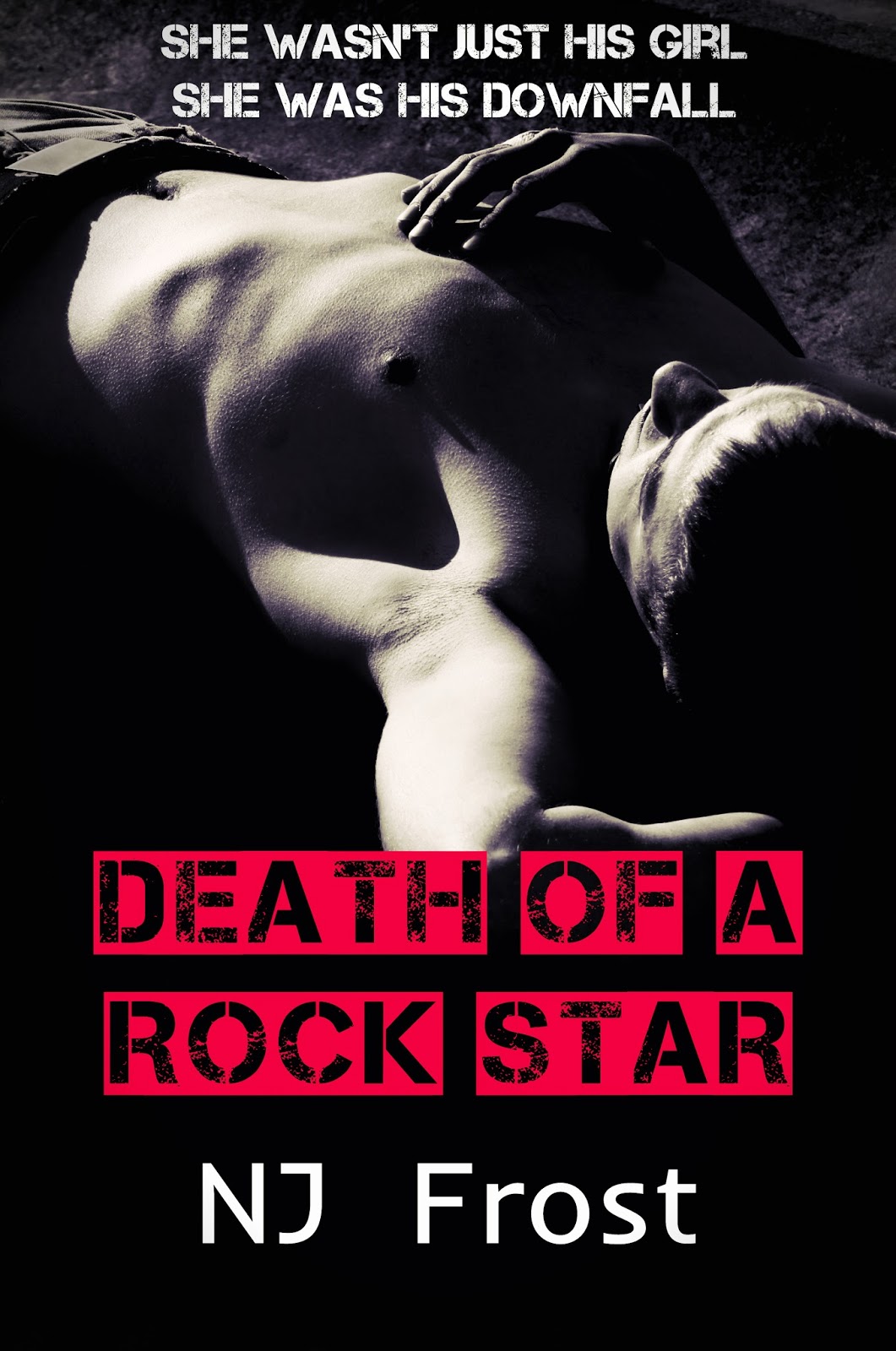 So there you have it. Jamie is dead… and it's no surprise.
A victim of his addictions – his love of drugs and his love for her.

Sylvie Smith isn’t just any girl.
She was my best friend’s girl.
No, not just his girl, she was his downfall.
She’s the last woman on earth I should want,
but the instant I set eyes on her I know.
She'll be my downfall too…

Thrown together in the aftermath of Jamie’s death,
Blake and Sylvie's worlds are set to collide.
Are they a disaster waiting to happen
or an epic love story about to begin?

NJ is an avid reader and obsessive writer, fuelled for the most part by chocolate and coffee.
During her postgraduate studies in English Lit NJ became a contemporary romance junkie and finally found her calling. A twisted romantic at heart, she loves nothing more than losing herself in a good book with lots of passion and angst. She’s always at the mercy of one book boyfriend or another, so creating her own book boyfriends and torturing them has been a wicked dream come true… but she may have lost her heart to her victims in the process.
Although she enjoys the darker side of romance NJ loves a ‘Happy Ever After’ and is eagerly pursuing her own.
THE BOY IN THE BAND, NJ’s full length follow-up to DEATH OF A ROCK STAR is due for release Summer
2014.

Playlist
Music has played a huge part in the inspiration for Death of a Rock Star & The Boy in the Band – my playlist is endless, but here are a few highlights…
Arctic Monkeys – Why’d You Only Call Me When You’re High
Bastille – Icarus
Biffy Clyro – Biblical
Birdy – (Live Lounge cover of Passenger’s) Let her Go
Chvrches – Recover
Eyes on Film – Waking up Dead
Foals – Inhaler
Foals – Late Night
Foxes – Youth
The Fray – How to Save a Life
Indiana – Don’t You Wanna Mess Around
Interpol – Rest my Chemistry
Interpol – Slow Hands
King of Leon – Closer
The Libertines – Time for Heroes
The Libertines – Don’t Look Back into the Sun
London Grammar – Night Call
Maximo Park – The Night I Lost My Head
Maximo Park – Your Urge
Tom Odell – Hold Me
The Orwells – Dirty Sheets
Rat Attack – Saturday Night Feelin’
You Me at Six & Chiddy – Rescue Me 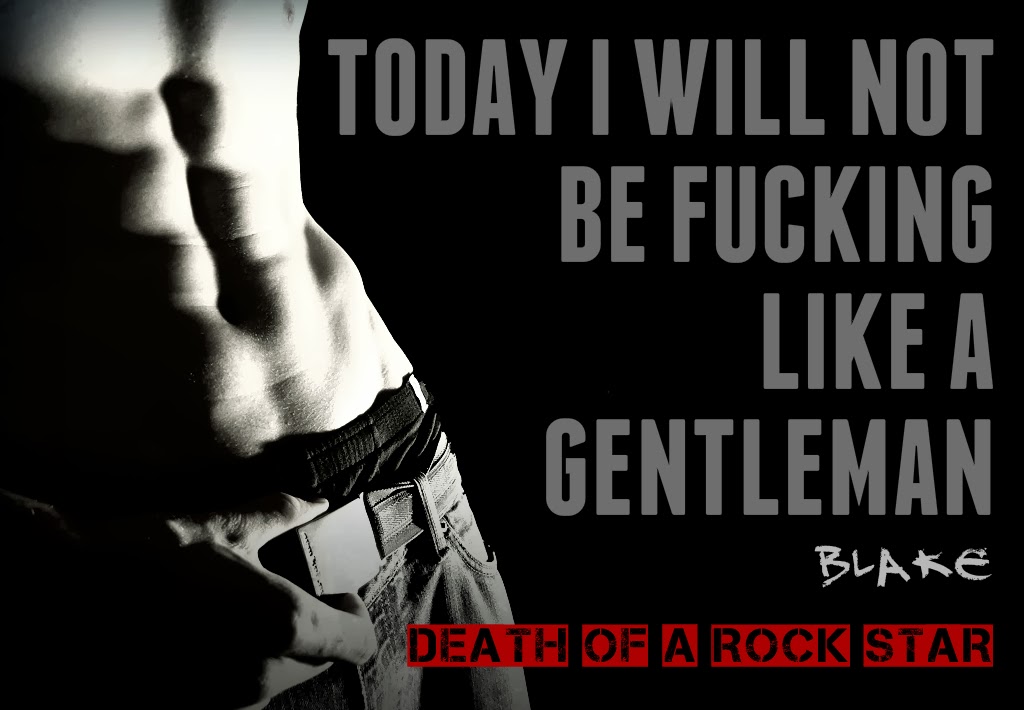 Excerpt
★Blake
In spite of the rain, there’s a crowd milling around outside Jamie’s house and a pool of defiant candles casting their golden light into the dark. It looks like someone has scattered stars on the pavement. This is what bereft fans do. In the absence of their Gods, they erect shrines – on their bedroom walls, on a dead man’s doorstep. Someone is playing his music. It rises into the night sky like a mournful offering, an appeasement to the rock gods. Those gods are so fucking brutal. It seems they always take the best of us far too soon.
As I stand at the furthest edge of this strange spontaneous wake, watching, wondering what the hell Jamie would make of all this, my gaze catches on a girl. Her face is heart-stopping and looks about as haunted as I feel. She’s gazing down at the candles, not really seeing them I suspect, or maybe wondering like me, how the fuck they are staying alight in this slow painful rain. She’s wearing striped pyjama bottoms tucked into huge combat boots that aren’t even fastened and a black biker jacket with an image on the back that is unmistakable. I’d know that jacket anywhere. It’s Jamie’s, which means – she’s her. She’s Jamie’s mystery girl.
My heart is ricocheting around like crazy. With anger and I’m ashamed to admit, with crazy lust. For a moment I regret that my cock decided to behave on the way over here. I wish I’d fucked the nameless model senseless just like I needed. Maybe I wouldn’t be aching now at the sight of my dead friend’s girl. No, not his girl, his fucking downfall – I have to remember that. Seeing her now though, for the first time, I understand. I thought Jamie was crazy for letting a girl get to him like she did. Now I get it. She’s that kind of beautiful. The kind of beautiful you’d die for. 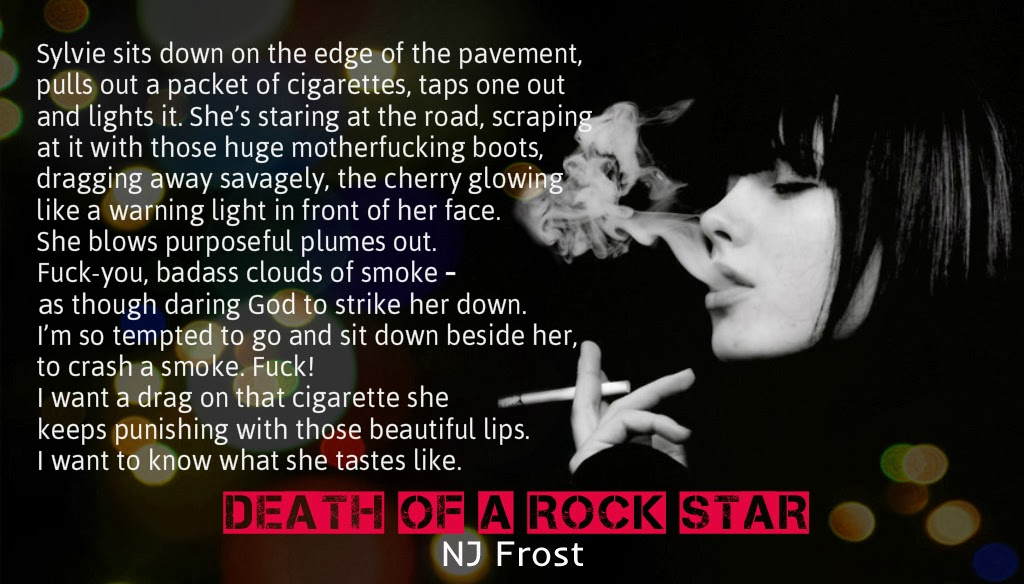