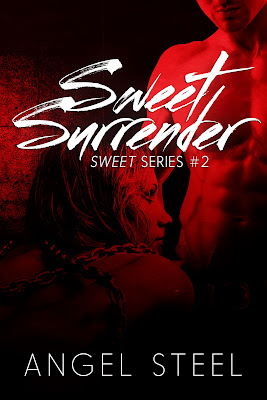 Sweet Surrender Book Synopsis
For five long years, Chantal has been in love with Dom. They have always had a great friendship and flirted with each other like nobody’s business, which just seemed to be their thing. Chantal’s feelings for Dom were obvious to everyone but him.
After being rejected for the last time by Dom, Chantal is fed up and ready to move on…or so she thinks. She finds solace in a familiar face and starts anew. Things start to heat up, and along with new beginnings come new surprises…and secrets. An old flame resurfaces and things go awry. The crazier life gets, the harder it is to keep her secrets from the people she loves, including Dom. Can she keep these secrets hidden forever?
Dom has been hiding his feelings for Chantal for five years. He just can’t see a way to make it work. There are things about him that she can never know. One could test her limits and the other would certainly test their relationship. Either way, Dom is afraid he will lose her if she were to ever find out.
Will the love that Chantal and Dom has for each other, be strong enough for them to cope with all of the lies and deceit? Or will it end them for good? 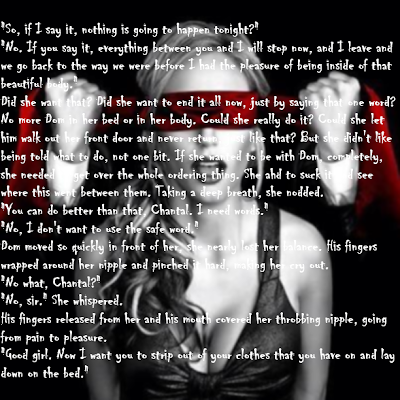 Dom continued pumping both his hands, his grip tightened around his erection, as his other moved faster and faster in her wet core. “Your close, aren’t you, baby.” He whispered through gritted teeth.
“Yes, sir.” She panted.
“I want you to watch me as I come all over you, darling.”
Opening her eyes as he shifted over her, twisting his wrist, hitting that magic spot deep inside of her as his fist pumped. His hips jerked forward and moaned out as his release shot out and landed over her lower stomach. Her walls clamped down on his fingers, wanting that release herself.
“Come now, Chantal.” Dom growled at her.
Screaming with the force of her release, her spine arched off the bed feeling like it was about to break in two. Her thighs squeezed his hand between them, but he was still moving his fingers inside of her, extending her orgasm.
“Oh my god.” She said between breaths.
Dom slid to the floor, and lightly kissed up her inner thigh and licked ever so slowly over her opening to her clit. She jolted from the contact. “The sweetest nectar.” He mumbled against her.
Dom crawled up her body, trailing kisses with him until he reached her mouth. Sliding his tongue over her lips, tasting herself on him, and closed her mouth over it. His semi erect cock laid over her thigh, and felt it twitch. Grinning to herself, moving her hand down her body and was about to wrap her hand around him, he was off her in a flash.
Dom stood at the end of the bed, pulling up his jeans. Frowning leaning up on her elbows, “That’s it?”
“That’s all you get for today.” Dom replied, and moved into her ensuite. Looking at his back as he closed the door, you have got to be kidding me, really?
Glancing down at the vibrator that was sitting in between her legs, contemplating weather to grab it or not, she never got the chance to grab it, as it was removed from her bed and taken away.
How did he get back in here so quickly? Glaring at Dom across the room, “And who is going to stop me from doing what I want?”
Dom leant down over her, hand on each side of her face, lightly stroking his thumb along her cheek, “I will, Chantal. If you get yourself off, I will know, and you will be punished for it.” He told her with a stern voice.
“What would the punishment be?”
“Could be many things, Chantal, and depending on my mood at the time. Are you going to go through with it?”
Shaking her no at him, Ok, maybe she needed to rethink that thought. Straightening, holding out his hand to her, she slid off the bed and stood right in front of him, pulling her flush against him, “Every single one of your orgasms belong to me, no one else. Now, since you have things to do today, so do I. Go have a shower and I will drop you off.” He said as he turned her around and slapped her bare ass, hissing in a breath, she spun around and faced him. Raising his eyebrow at her, waiting for the smart ass remark to come out, but swallowed it down. Well two could play that game, she thought.

Author Bio: Hi, My name is Angel. I'm an Aussie author, from the land down under :). Have lived here all my life with my wonderful husband and 4 children. Love reading any kind of books and love to write, but love writing more. My love of writing started when i was young, my mother always said i had a vivid imagination :). Love to hear from my readers, either on amazon or facebook.

Keep up with latest from Angel Steel
On Facebook

Grab your copy on Amazon
or Barnes & Noble