First Sergeant RafeMurano did everything to the extreme. He trained harder, he fought harder, and, unfortunately, he loved harder. And falling for the wrong woman nearly destroyed him.


Home from a deployment, and without his missions to consume him, Murano is ravaged by memories of his heartbreak. So he drinks until he’s numb and drowns himself in meaningless one-night stands. But they only take the edge off…


Until he meets Fallon.


Haunted by her past, Fallon Kelly knows all too well about the desperate desire for an escape. So when she sees the tatted-up bad boy who’s one punch away from a ride in the back of a squad car, she offers a distraction—one that quickly becomes an addiction.


Little does she know, this bad boy can love so hard, it can break her… 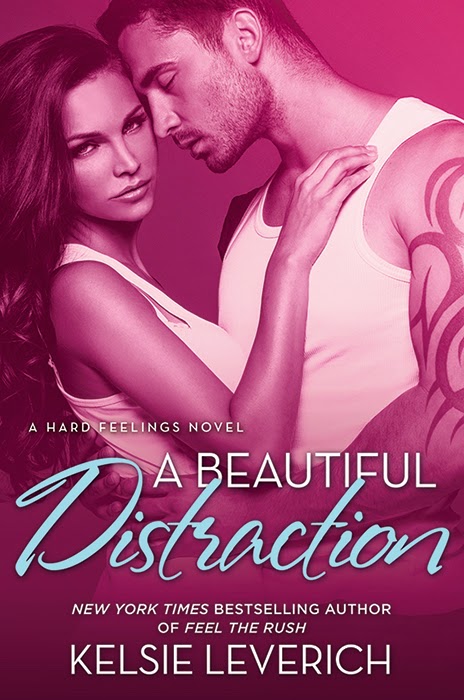 Review By Roxy
And what a Distraction it was!!

This is part of the  Hard Feelings Series. Though I have not yet read the other books in the series, this could be read as a standalone.

I absolutely fell in love with the characters in this book. We meet Fallon, in her element, on stage, dancing for herself. A graceful dancer ostracized from her prominent family at a young age, she is now the owner of Velour, a burlesque club in Denver. Velour is one of the "IT" clubs. Fallon has struggled through some tough times in her past, but now she gets to enjoy life and dance when she wants or needs to. Through all her hard times, she has built walls around her heart so as to never get hurt again.

Sexy bad-boy soldier Rafe is trying to get over his heartache. He's drinking and fucking around, anything to just not feel or remember "her" Rafe has been trying but failing to forget the one woman he loved. She made him a man he was not proud of.

When Rafe first lays eyes on Fallon, she's on stage in her own world, until she feels the pull of his stare. When Rafe defends one of Fallon's girls, she sweeps in and gets him out of the club before the police arrive. After getting to know each other and spending the night in each others arms, the spark and pull are undeniable. They are just the distraction for one another that they didn't know they needed.

After some struggling with her heart, Fallon is realizing Rafe has worked his way into her life. He is her perfect distraction.

Rafe knew from the moment he heard Fallon's voice she was the distraction he needed. Now he needs to show her how good they can be together.

Kelsie Leverich is the New York Times bestselling author of The Valentine’s Arrangement as well as other contemporary romance titles. Kelsie grew up in the small town of St. Joseph Illinois before getting married and following her husband from one Army post to another.  After eight years, they finally settled down in Avon, Indiana with two adorable knuckleheads that are better known as her kids.  Kelsie's life revolves around her family (to include three dogs and a cat) and most of the time, actually all of the time, it’s a crazy mess—but that’s the way she loves it!  When Kelsie’s not writing, you can usually find her snuggling on the couch with her kids and a good book or out on the lake with family and friends.  Kelsie is not a morning person, has a soft spot for animals, loves musicals, hates seafood, and thinks laundry is the source of all evil.
Represented by Jill Marsal of Marsal Lyon Literary Agency.
You can find Kelsie on Twitter and Facebook, or visit her website at www.kelsieleverich.com


a Rafflecopter giveaway
Posted by BadAssDirtyBooks at 8:00 AM